So, I have had MANY requests for the pattern of my Reddit Alien hat that I’m going to go ahead and post my pattern without the usual testing that I would consider normal before releasing a pattern. Please, if you have any questions or find any errors let me know and I apologize upfront for it, alright? That being said, it really is an easy hat to make believe it or not.It made a hat big enough for my head and my hubby’s head, but was a bit big for the children so take that into mind if you need to omit a round of increases or such.

Get out those stitch markers, I did it in a round.

Earflaps: (you can use this simple one or one of your favorite ear flap patterns or no ear flaps at all)

For the left earflap count back from original hat end point about 22 hdc then follow the instructions for the right earflap.

Now to finish up the bottom of the hat!

Bind off and weave in ends.

Cut 4 strands of the white and red yarns about 24 in strands. If you want longer ties, cut your strands longer. Now fed the one end through the two tc on the ear flaps and put the middle of the strands there. Divide out the yarn into groups of three and braid down the length as far as you want or all the way down. When done do a simple loop knot followed by another loop knot about an inch apart and trim off the ends.

Antennae: I used a size F hook just for this part to keep the stitches close (stuff as you go, trust me)

the next two rows are optional, but I find it really helps the antennae stand up and easier to attach)

bind off, weave in, finish stuffing and then sew to the very top of your hat.

Ears: (make four, join 2 together with sc along the top curve)

I stuffed my ears before attaching them to the hat for a ‘fuller’ looking ear.

Attach tip of ear to the hat at around the fourth row of your hat and hold the ear together as you sew down the length of the ear.

Alright, take a deep breath and the wOOt as loud as you dare for you should have a lovely hat! 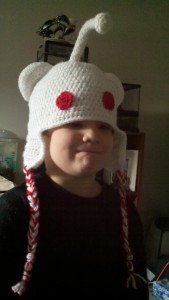 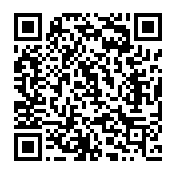